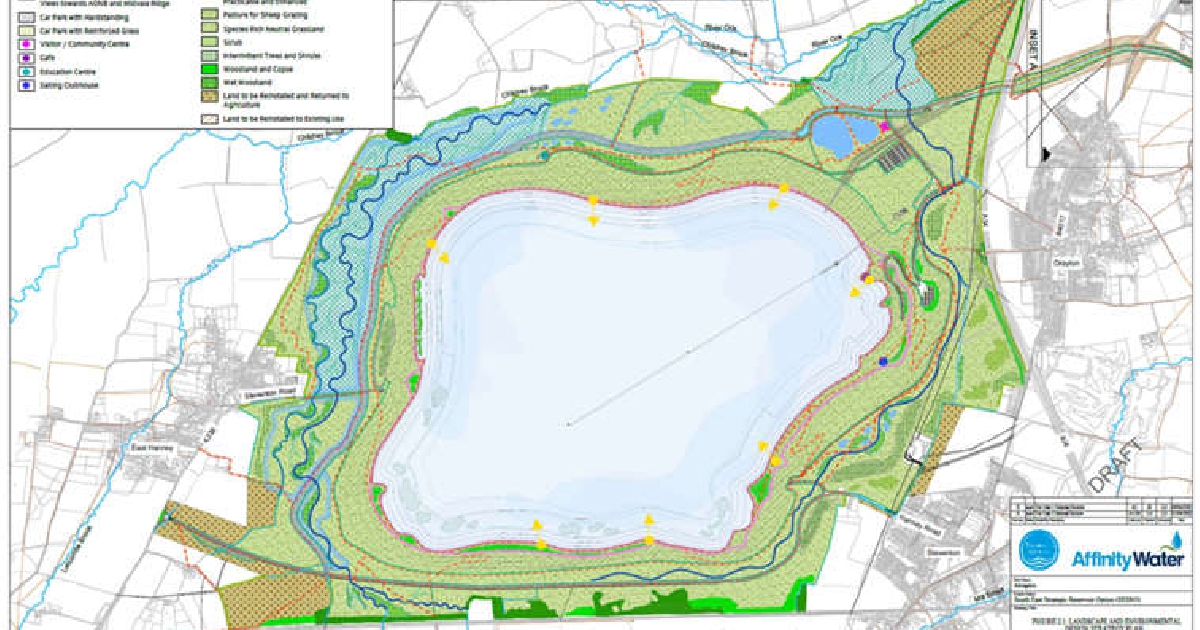 The Water Resources South East draft regional plan concerning future water supplies, includes proposals for a reservoir located between Abingdon, East Hanney, Steventon and Marcham, which would hold up to 100 million cubic metres of water – known as the South East Strategic Reservoir Option  – as well as other ideas for securing future water supply.

In the council’s draft response, the plans are described as “deeply flawed” and based on “unrealistic and non-evidence-based assumptions” about climate change, as well as “ludicrously outdated population projections”.

The response calls the £1.244 billion reservoir “a destructive scheme, both environmentally and in its impacts on local people”, with bill-payers effectively being asked to “sign a blank cheque”, with no clear cost-benefit analysis or justification.

The reservoir previously appeared in the regional plan, which Oxfordshire County Council responded to in March 2022. Despite about half of the 1,150 responses indicating direct opposition to it, the giant reservoir proposal was not removed from the draft plan.

A similar reservoir proposal was also rejected by the government in 2011 following a public inquiry.

Thames Water says it's considered over 1,400 options to plug the shortfall between the amount of water available and the amount needed in future.

It needs to find a billion litres more by 2075 - accounting for things like climate change and population growth.

They recently held events in Abingdon to get residents thoughts, and will hold another meeting on 18th February at Steventon Village Hall.

We're asking for feedback on the big decisions we need to make to meet our regional water challenges, especially planning and building new water resources infrastructure.  It will be many years before they're ready to provide a safe, secure water supply for our children and grandchildren as well as bringing benefits to our local communities and the environment, but we need to take the strategic decisions now.

We want to ensure everyone can come along and find out more information about plans and that a wide range of community opinions are reflected in the feedback on the consultation."

Councillor Pete Sudbury, Oxfordshire County Council’s Cabinet Member for Climate Change and Environment, said: “We have consistently opposed this reservoir proposal, which we believe could turn out to be a damaging white elephant that will not be resilient to the kind of multi-year droughts we are seeing in many parts of the world.

“It will arrive too late – climate change is worsening rapidly, and this scheme takes 20 years before it does anything. Putting more than a billion pounds into this project will delay quicker and more reliable schemes, including recycling and transfers from less water-stressed regions, which provide the early, powerful climate resilience we believe is urgently needed.

“Securing water supplies for the people of Oxfordshire in the medium to long term is something we as a council will do all we can to help, which is why we organised the recent water summit to look at the issues surrounding it. But building a huge reservoir, damaging the environment and the lives of the people living in this area, is not the answer.”